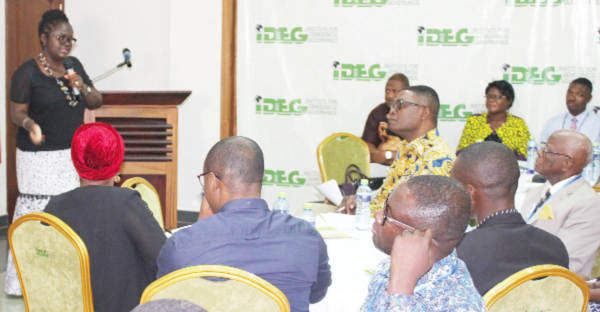 Cocoa farmers and some community activists are calling for the reclamation of their farmlands which have been destroyed by ‘galamsey’ activities.

According to them, until the full implementation of the Medium-Term Multilateral Mining Development Plan, their farm lands needed to be reclaimed for the economic health of the country and the security of their cocoa farms.

They expressed the views at a National Advocacy Dialogue in Accra yesterday on the topic: “Galamsey and its devastating effects on cocoa communities.”

It was organised by the Institute of Democratic Governance (IDEG), with the support of Mondelez International, the biggest cocoa company in the world which is supporting development initiatives in 447 cocoa-growing communities in 15 districts in five out of the six cocoa-growing regions of the country.

With the exception of the Volta Region, the five regions are the Eastern, Central, Ashanti, Brong Ahafo and the Western regions.

Partnering with IDEG on its Governance Issues Forum Network (GIFNet), the two institutions are building the capacities of community members to identify their own development gaps and engage their district assemblies for solutions.

The national dialogue, therefore, afforded the opportunity for the challenges posed by galamsey on cocoa farmlands to be deliberated on among farmers, community members, civil society organisations, local government representatives and government officials for effective action.

Other non-governmental organisations in partnership with Mondelez International on other aspects of development in cocoa-growing communities, such as World Vision, the Right to Play, Child’s Right International and Abantu for Development, were also present.

She said it was the mission of her organisation to ensure communities that were enriched as farmers went about their business of producing cocoa beans.

Mrs Amekudzi conceded that the challenge of galamsey was complex and called for the rights to land in the country to be clarified to put an end to the issues of land being sold outright to foreigners to be used for illegal activities.

The dialogue was also used to present findings on a policy brief by IDEG on “The devastating effects of galamsey on cocoa communities in the Juaboso District of Ghana”.

A Project Officer of IDEG, Ms Eileen Goody Gans-Lartey, who presented the paper, said although the anti-galamsey effort was successful, the damage already caused in places such as Mantukwa in the Juaboso District was enormous.

Two community activists and farmers, Nana Bernie II of Adwumam and Hagar Owusu, who are also members of the GIFNet, shared their experiences on the issue.

They said most of the illegal operators came to their communities with mining licences to start operations on farmlands.

Sometimes, they added, the illegal miners started operations without the knowledge of community members, who were usually intimidated by the local authorities and the police when they took the initiative to report.

The Executive Director of IDEG, Dr Emmanuel Akwetey, was excited about the conversations around galamsey and farmlands that had brought up better opportunities for collaboration and further mobilization.